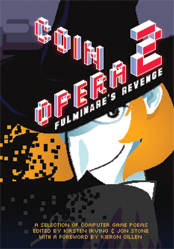 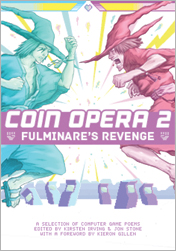 I have never enjoyed running so much / as when I have my white wolf's paws under me / drumming the earth, showering blossom.

Once again, I, Dr Fulminare, have set a generation of plundering wild-head poets loose on the whole four-decade span of electronic gaming, compelling them to seek out mystery and meaning in a panoply of virtual realities. This time the scale is grander, the rewards richer, the effects dazzling in their variety.

Mixing existing poems by well-known performers like Ross Sutherland and Nathan Penlington with newly commissioned work from a plethora of young writers, Coin Opera 2 uncovers the surprising similarities between the two mediums: the hidden rules and restrictions, the role of rhythm and structural repetition, the need to access that vital space between too hard and too easy which snares the human imagination, and, fundamentally, the importance of play.

These are poems that dont just respond to the games that inspired them, but mould and reshape them, mimic and tinker with form and convention, fuse and confuse our world with theirs.

Expect poems made entirely out of Playstation controller inputs, Lemmings as a metaphysical tale of transcendence, Caligula cynically gunning for a role in Final Fantasy IV, two-player head-to-head and collaborative poems, and mega-size boss poems.

Everything, in fact, that I need to make my dreams of vengeance and world domination a reality.

Dont hate me for this  for my bloodied fists
caught up in your pelts oasis,
thighs buried in stalactites of stubble,
scuffed by horns of bone like missiles.
My elbows and toes grapple
with your colossal, questing bulk, dappled
by strange growths. I grope for pulleys and ropes,
wicker and wood lodged in your spine;
grope in the colosseum of your head
sporting pillared teeth and smashed masonry.
The thrum and chug of you, liquid muscle
between my legs, twisted thickets of gristle,
the whir of engines, the hearts hydraulic pistons,
the accordion bellows of your cavernous lungs,
each blasted breath a mournful waltz  I feel it all.
Fossil of drowned worlds, fossil of the sky,
you twist ribbon-like between floating hills,
playful in your zigzagging as a box kite.
From this height I can taste everything:
the seas cerulean blue hot as menthol,
the musk of your tough leatherette, old as earth.
I crawl over the crenulated battlements
of your body, flat on my belly, through
hessian tufts of tubers, frozen nodules;
across your mottled, granite-flecked hide
pocked with whiskers like sticks of gelignite.
Your back is a city whittled to ruin
and I the tourist who will infect and spoil you.
Dont hate me for the blade I slip into your sinew
then crack and twist as if disembowelling crayfish.
Every faucet of steaming black blood
splatters my cheeks, my tunic, my horned helmet 
and I know now how David felt, the spire of you
buckled, a brace of rabbits broken-necked,
as you descend from your former majesty,
the cloud fortress of each eye dispersing.