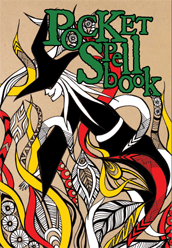 Mark Waldron, Luke Kennard and Others

Slide up the iron eyelid, stoke / the butterfly-blue wings of flame.

Charms! Incantations! Effects both welcome and unwelcome! Here, for the first time, is the handiest of handy resources for the budding 21st century magic user. I, Dr Fulminare, have enlisted some of the most formidable spell-crafters in the underground spell-crafting scene and squeezed them for their most potent, most agreeable recipes. Think of this as a sorceror's Swiss army knife, a conjuror's camping cook-book, a warlock's wicked bag of tricks.

Featuring words and art by:

To change one dog to one cat

you perhaps ought to take yourself
to the park at a convenient time
of your particular choosing.

You should find there what may be a dog,
knowing it by its humour.

Take it home. Then, fast on the ready table,
siphon its yap (you can do this);
then on the washed table,

stick it with a shameful enslavement to mice;
in the drawing room, on cushions,

make it to fathom slowly and then quick
that it is not itself; disconnect
(with a straightforward yank)

its crush on booze
and the chew of the meaty cigarettes

and the grunt of the trundling ground.
So, first ordain it a fish ?
cat being fish; dog being fished.

Make sure to bend it, as well, to a pale,
dusty blue before you plead it,

and if needs be, require it to black;
and to show what you?ve done,
make it to whistle itself; once if you like.